This year for our neighbor gifts we decided to do the nativity on a glass block. We found one we liked on the internet and downloaded it.   Love that this one has a dog and a cat!

Deciding what size of block to use was the first decision. I guess I really like the rectangle block a little better than the square this year!  Then what and how much filling to put in it.  We played with the different colors and types of filling and decided we liked the silver or gold balls. We knew we wanted lights. Finding them with white cords was a challenge so we just went with the green cord.  We played with how much filling went in and decided that we liked it with a little less than full.

Next we cut the scene our of matte, black vinyl. I like the matte a little better than the shiny, it seems a little easier to work with.  We made sure we liked how it looked on the block. 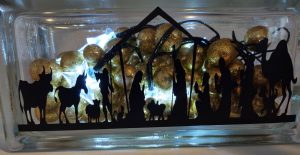 Then we started to assemble. Steve has a pair of needle nose pliers that are about 12″ long and they helped a lot to get the lights right where we wanted them. We know they will move some, but we positioned a few then added some filling, then lights, then more filling until we had them as full as we wanted.

We ended up gluing the battery pack to the back of the block and that seemed to work well. 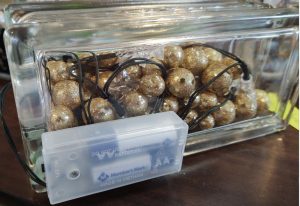 Thanks for taking time to stop by!

A few weeks ago I posted how to make these balls into ornaments. My friend (Dee) told me how cute she thought they were and how fun she thought they would look on her hook. I hadn’t figured out what to do for her for Christmas yet. So I decided that’s what I would do for her! So here they are with a little more decoration than the earlier post! I use glitter glue and strings of gems to do the decorating!! And then we delivered them and hung them on her hook! She seemed to like them!!! 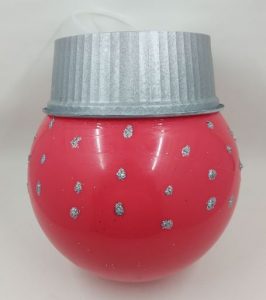 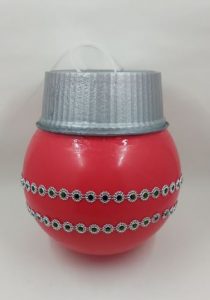 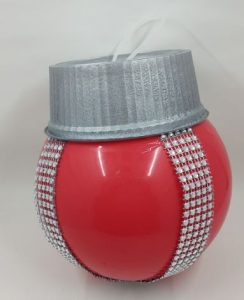 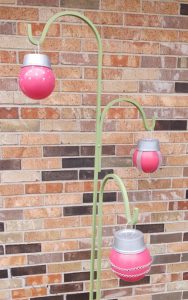 Thanks for taking time to stop by!

A friend of mine asked me if I would help her make a gift for a friend of hers.  She wanted to do an LDS temple on each side, as well as some wording. I thought it would be a pretty fast and easy thing! It wasn’t and so I thought I’d tell you some of the things I learned.

The first thing was finding the pictures and I had her do that so she got the views she wanted.

Then deciding on the fonts and placement of the wording was the next thing, Again I was letting her decide on the fonts. We gave her too many options and so this took longer!  The placement is something I worked on later and it had it’s own challenges. The font she chose had the capital letters spaced differently than the lower case and she wanted those moved. Then to get it centered in the temple shape made it so I had to separate some of the lines.

Then I cut it out of shiny, black vinyl.  It cut ok but by the time we sized it to the block the parts were so small that weeding was a challenge!  I had to get a magnifying glass out to get it done!

When I finally was ready to put it on the glass I ran into more problems. I don’t know if it was because the vinyl was older or if it was the way I was applying it but I ended up with bubbles everywhere that wouldn’t come out. So I had to start over with the cutting and weeding and applying. I looked online to see if I was doing something wrong. I even contacted Cricut to see if they could tell me what to do. They couldn’t. So I ended up having Steve hold the vinyl up off the glass while I worked it down about 1/8″at a time. I still had bubbles but not near as many. 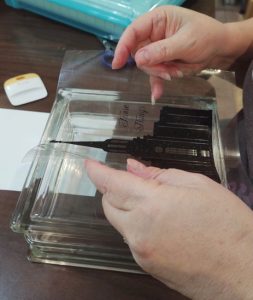 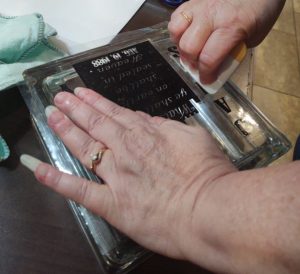 Now it has been a long time since I did one and the kicker to all this is that I put the design on so that the opening was on the bottom! After all the problems we left it that way!

Next was the filling and ribbon and attaching the battery packs.

The filling I left up to my friend. Here are a couple of pictures of what she tried. She ended up liking the clear stones the best but it makes the block very, very heavy. 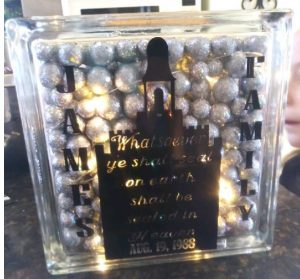 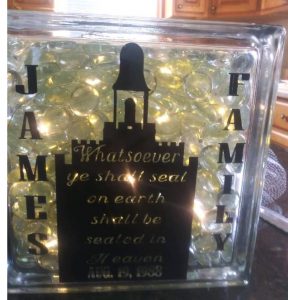 The ribbon was just a matter of finding one she liked and then the ribbon was easy but attaching the 2 battery packs was a bit of a challenge because she didn’t want the black to show. We ended up covering 2 ends with ribbon and making the bow tight enough to hold them in place. 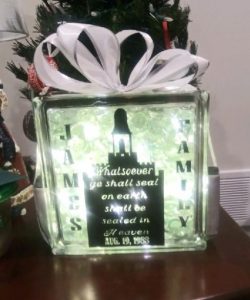 Overall I think it turned out ok but I would sure do things different next time!!!

The final recipient really liked it and that is what matters!!!!

We had a few requests for some Christmas boxes like we did for Halloween. It took us a little bit to find the boxes and we found some that weren’t the book style first.  So we decided to tie them all up with ribbons!!! There are a few more that I don’t have tied yet, we will add the pictures in the next couple of days!!! 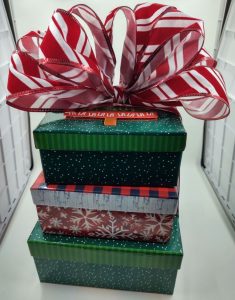 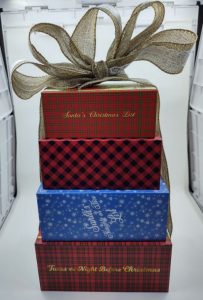 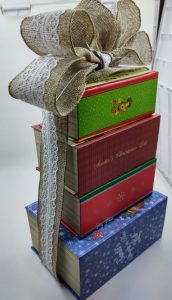 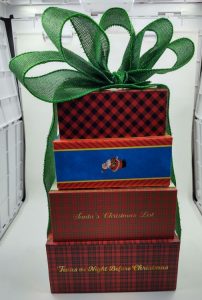 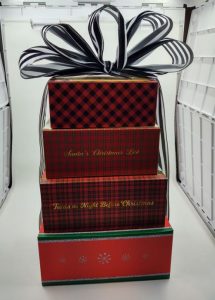 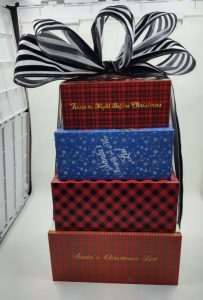 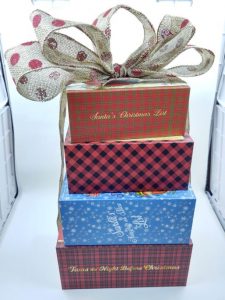 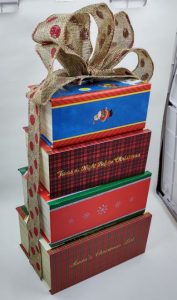 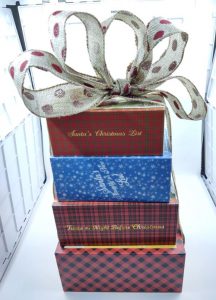 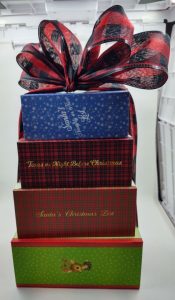 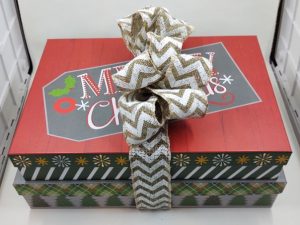 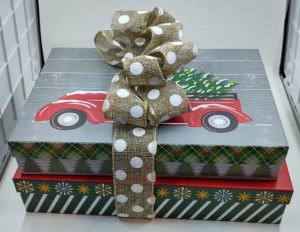 I think I mentioned in a few blogs back that I was trying to make a coloring book portfolio for a friend. Well here is my attempt.

I started with figuring out the size for the cardboard base. Steve helped me cut it and then we laid it out to see. Then I scored the cardstock on my scoring board where it was going to need to fold. The next thing I did was to figure out the magnet placement and tape the cardboard to the cardstock. You can see that I chose to use double sided tape. I taped next to the score lines and then more in the larger areas.

Figuring out the pocket that would allow the coloring book to be replaced was a challenge. But I got it to work. I adhered it with WeldBond glue (thanks for the advice Danette).

Then because the size was a full 12″ tall I needed a way to cover the edges. I chose ribbon. This was put on with WeldBond glue again. This was a time consuming process because I could only do one side at a time and then had to turn it over to do the other side, but I had to do the corners on both sides at the same time.  I’m sure one of my crafty friends has a better way to do that but …..

The next thing to do was attaching the zipper pocket.  The plastic pocket wouldn’t stick to the paper no matter what I tried. So we came up with the idea to sandwich it between 2 pieces of cardboard and secure it with brads and tape.  This worked great and I love the way it looked! 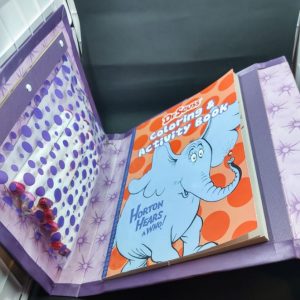 We didn’t take many pictures in the process but here are a few in the done stages. 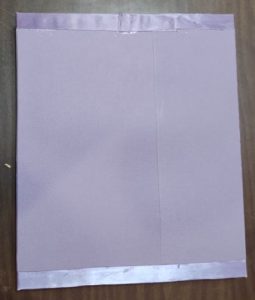 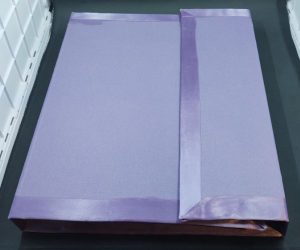 After we got this done we agreed that it would be easier and less expensive and last longer if you made it from material and just sewed the cardboard pieces into pockets. So when I took it to my friend that I had done it for, that is what we told her. She is a quilter so she could do those better than I could! If I could find my sewing machine I would do that!!

We decide to give the prototype to my granddaughter for Christmas. So here are a few pictures with it decorated out! 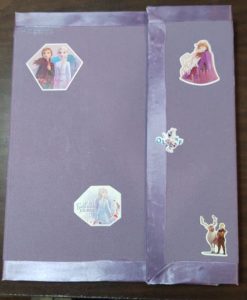 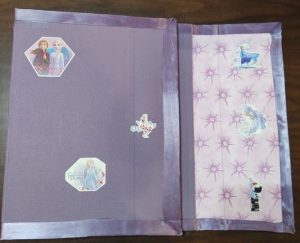 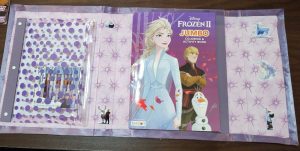