So, here are the rest of the wedding things. Again, I had the Cricut do as much as I could. On the invitations I used Word and printed them. 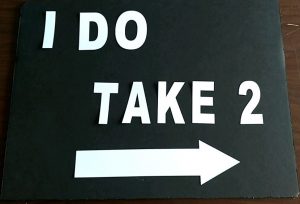 This is a sign that they are putting on the road to help people find the venue; we did 3 of these.  This is obviously a second marriage for each of them!!

Because this is a second marriage they wanted to remember those that have passed on.  The bride found this saying and she is going to put pictures on the sides. This was an 11″ x 14″ sign they are putting on a table.

This is the invitation. We had to have the printing done with our inkjet printer because I couldn’t get it to work right on the Cricut.  Then, you can see that we put it on black paper and decorated it!  This is a small one, we did 20 of these. Then, we also did a couple that were 8.5″ x 11″ that they posted in their church meeting houses. 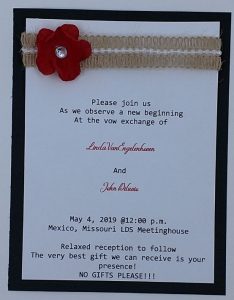 Thanks for taking time to stop by!!!!

I told you all last week that I was working on some things for a wedding. So, I thought I’d show you one of the things.

This is a wood frame I bought from the clearance section at my local hobby store. I have cut a lot of vinyl, but haven’t applied it to the wood myself before; so, this was a new thing for me. I have previously cut the vinyl at work and the other people have applied it; and they always use a sealer over it. I didn’t want to use a sealer if I didn’t need to. I’ve watched some how to’s and decided just to try it. The board looks like it is kind of white washed and feels chalky, but that didn’t stop me! I like the look of the frame and the base board. I felt like adding a sealer would change the look. 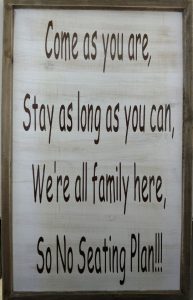 I typed in, chose a font, sized and cut out the saying in Cricut Design Space. I used Cricut Permanant vinyl because it was on sale this week. Then I weeded. It was a little harder to weed than some other brands I’ve used, but I got it weeded okay.

Now to get the transfer tape on without bubbles. This design is 9.5″ x 16.5″ so it was a large area to cover straight. Steve helped and we got that done.

Next step was to get it on the board! Once we had it straight and centered, getting it down again without bubbles is the trick. I’ve done this on things before, but nothing of this size. But with Steve’s help we got it down!

Let the braising begin!! I knew it could be harder because the finish on the wood was not very smooth or thick. So, I pushed hard and long! It’s hard to tell if you have this step done enough.  Then we started to peel the transfer tape. When it came off the board white, we got a little worried. We had several places where the lettering was coming with the transfer tape. I put back and braised again each time. Some of them I had to pick off the transfer tape with my fingernail and then peel. At this point I was pretty sure we were going to need a sealer.

Once we got it all off the transfer tape and on the board I used my hair dryer to warm the lettering up and took the liner sheet and braised it all again really well. We decided to let it set over night and see what happened.

The next morning when I checked it, almost everything was stuck to the board well except the first letter. I wondered what to do to fix just that one spot. I finally decided to use some wood glue I had and see if that would fix it, if not a sealer was the next choice.

It worked Great!!! I just brushed a little on the part of the letter that wasn’t stuck and carefully put it back down. Again I left it overnight. It is all sticking great now!! And I’m so glad because I have 3 more frames that I want to do something on!!

Sorry this is so late getting posted, today was our granddaughter’s birthday.

We saw these shadowboxes at a store we visited and could see so many different, fun possibilities! So we decided to get a couple in and do one up to see how it went.

So it comes with the shadowbox separate from the wood kit, in white or black. Then you can just change the decor out whenever you want because the pieces are magnetized.  The back of the shadow box is metal. 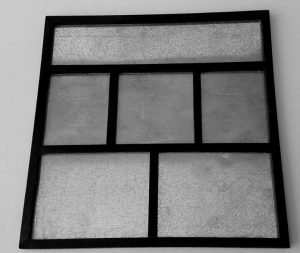 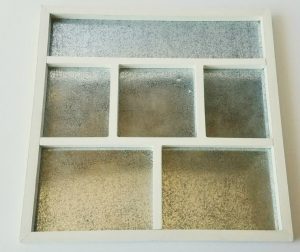 And then there are a lot of different wood kits you can do. We decided to start with the summer kit.  This is what it looks like. 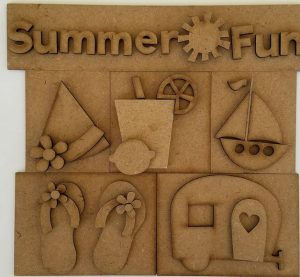 I used paper that I already had on hand. I love the bright colors!!! 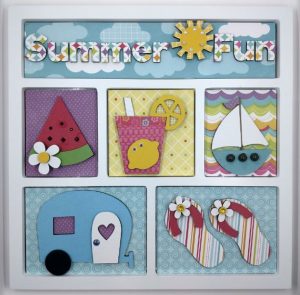 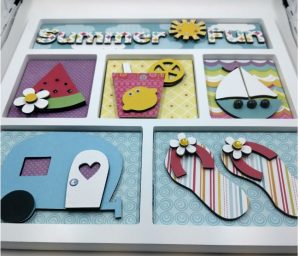 We have just 2 of these kits available at this time! We will get more in if there is interest. I have a Autumn kit that I am working on as soon as I get some things done for a wedding I’m helping with.  And then there will be some other fun ideas we have thought of or have had suggestions for.

Together the frame, wood, paper and embellishments run $45+tax.  Then the next kit would be $25+tax to do because you already have the shadow box.

We will be having class  May 4th at 10 a.m. and we think you can have it done in 3 hours.  We will have everything cut so you are just putting it together.

As the new year started, I was researching what might be popular this year and the color that seems to be on that list is this coral pink.

As I was out in the stores later, I found this paper pack! And it could be perfect for Easter or Mother’s day! 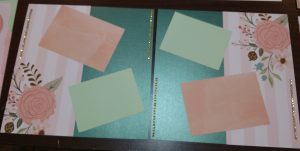 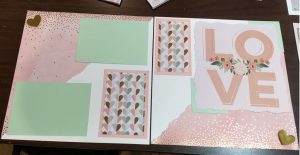 There are 5 double page spreads, and I used leftover materials to make 5 fun cards as well!! We think it would be fun to have a Crop Day where you could come and make the kit, but also stay and work on your own projects! I think the projects will take about 3 hours to complete if you are just putting them together, but it depends on how fast you are!! 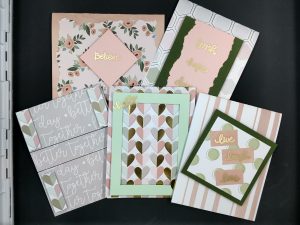